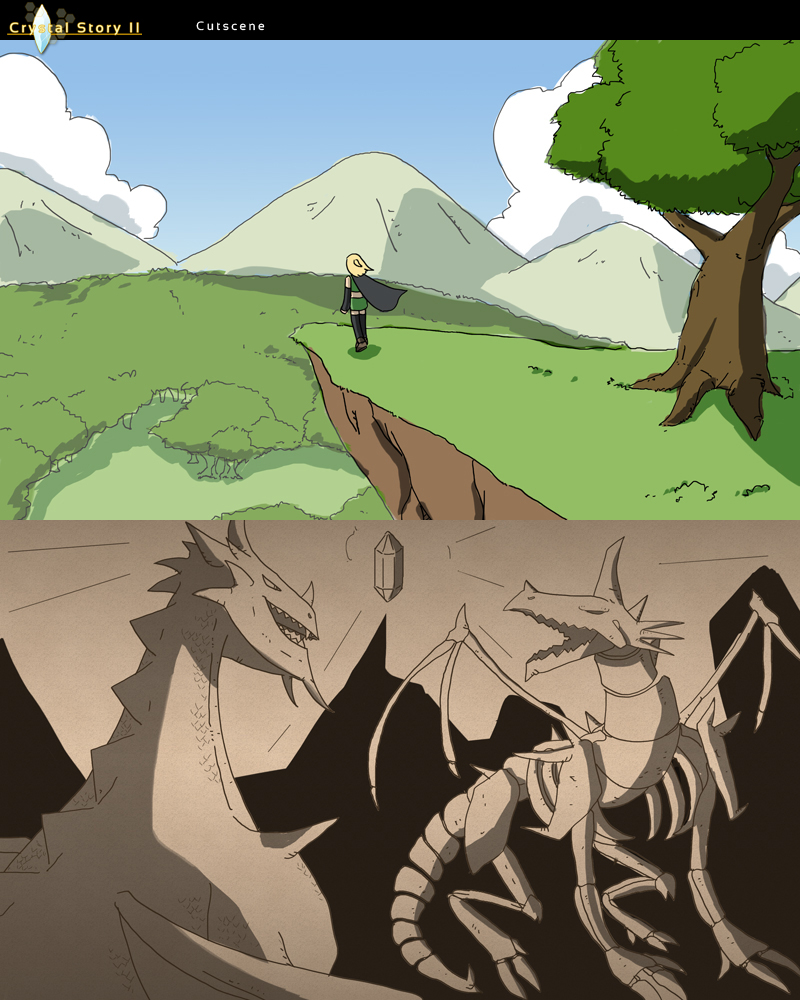 I have been coding so much this past week. I finally finished the weapon database and got special weapons to work. There are a lot of weapons on the game now and they are not just stats anymore. Here are some examples:

I haven’t been doing much art, so I guess here are more screens from the cutscene. :) 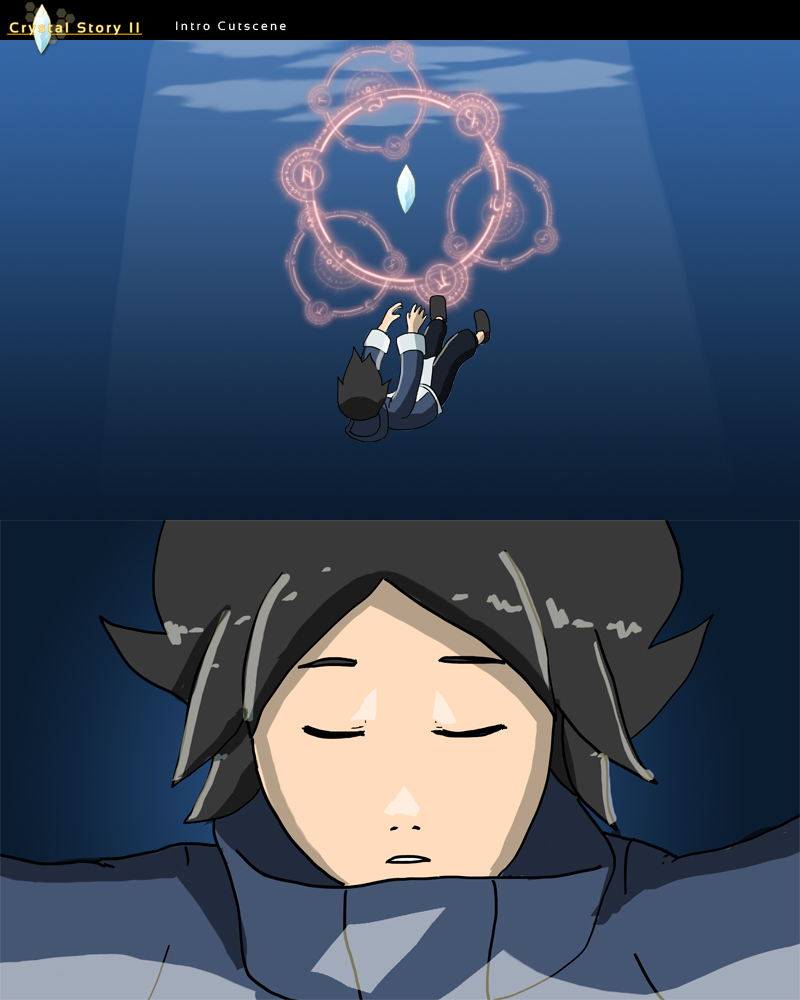 For the past week, I’ve been trying to figure out how to do an intro cutscene. I think I’m going to have a short animated (not too much) intro. I’m thinking it should be longer and should have more pictures than the first one. Here are some of the pictures I did for it. 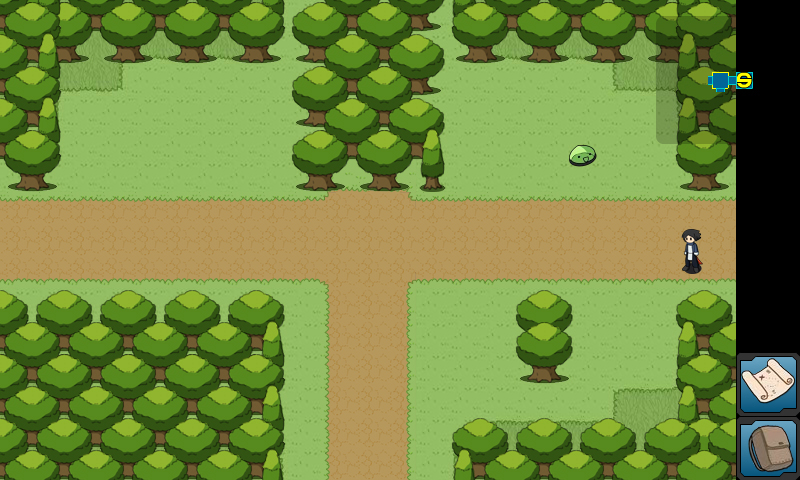 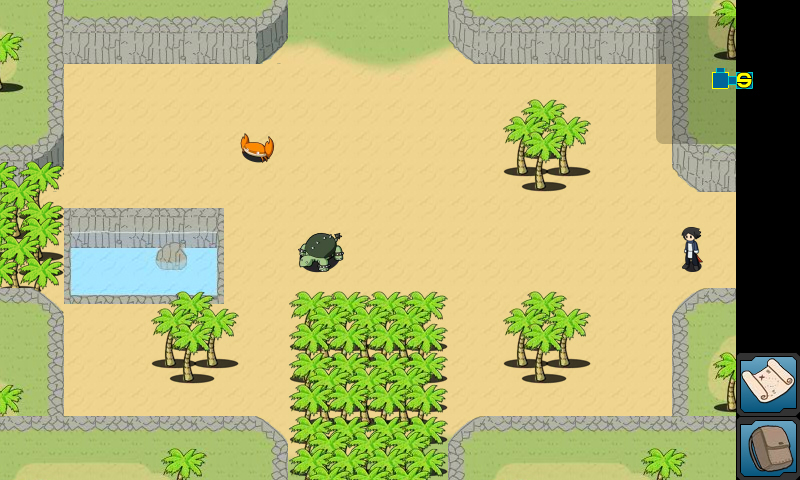 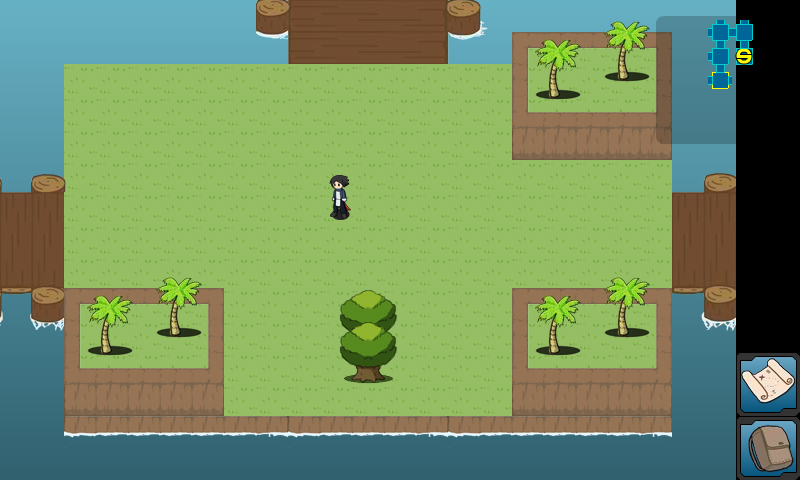 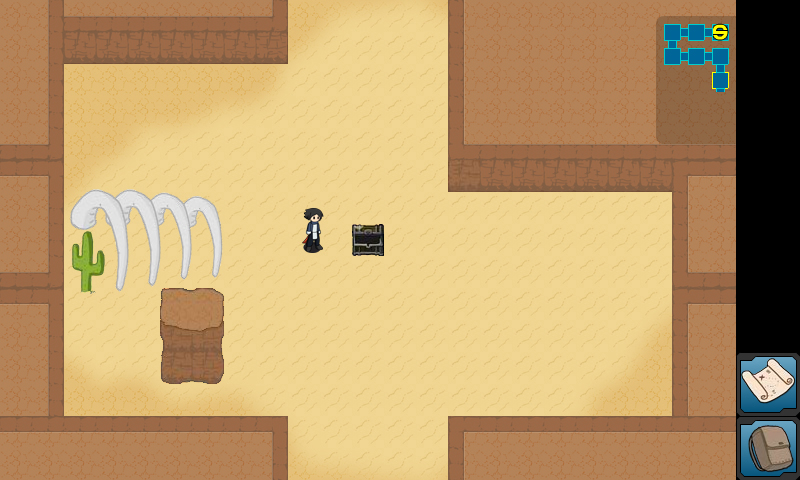 The first Crystal Story only had one dungeon to explore. I’m trying to add new and different areas to the second one. Here are some of the outside areas I have finished. I still have a long way to go.

School started again, so progress will be a lot slower. I’m still working on the game on my free time though. I’m hoping to finish this game by this year. 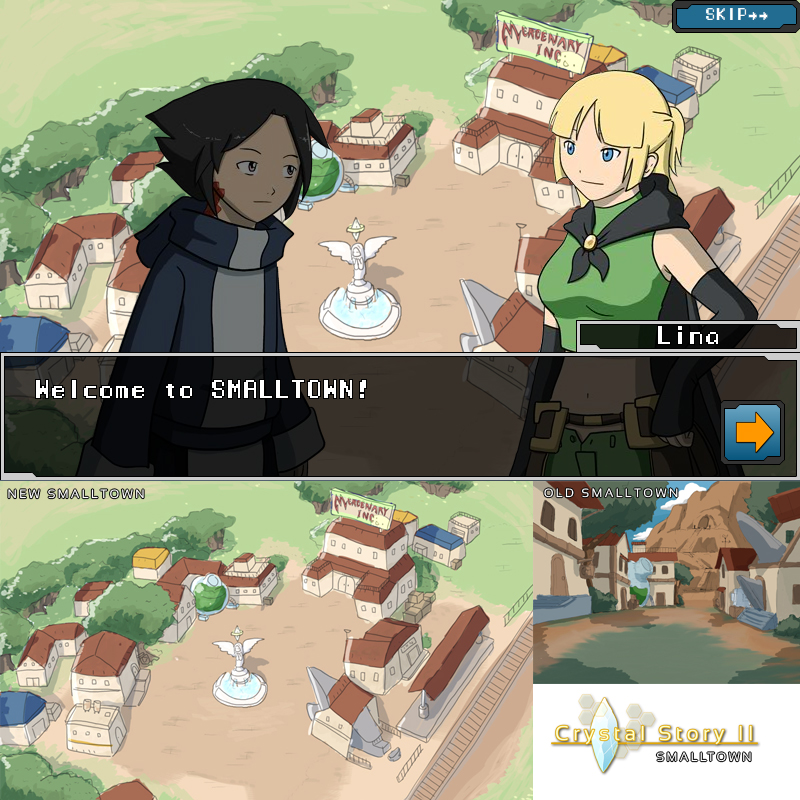 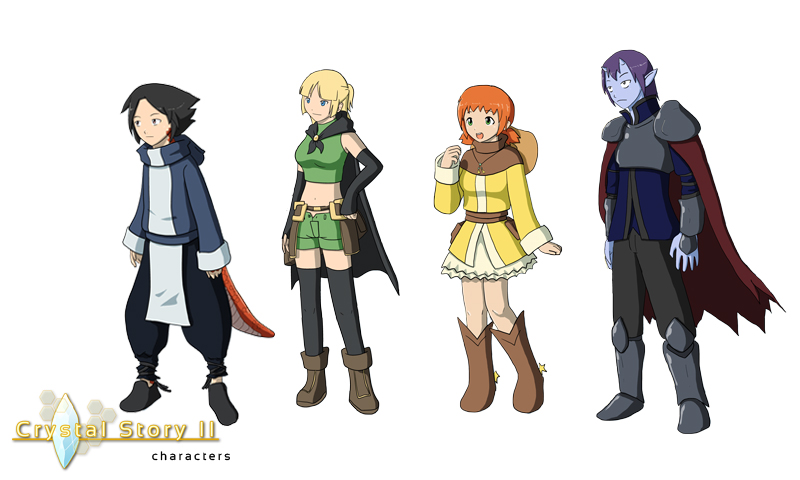 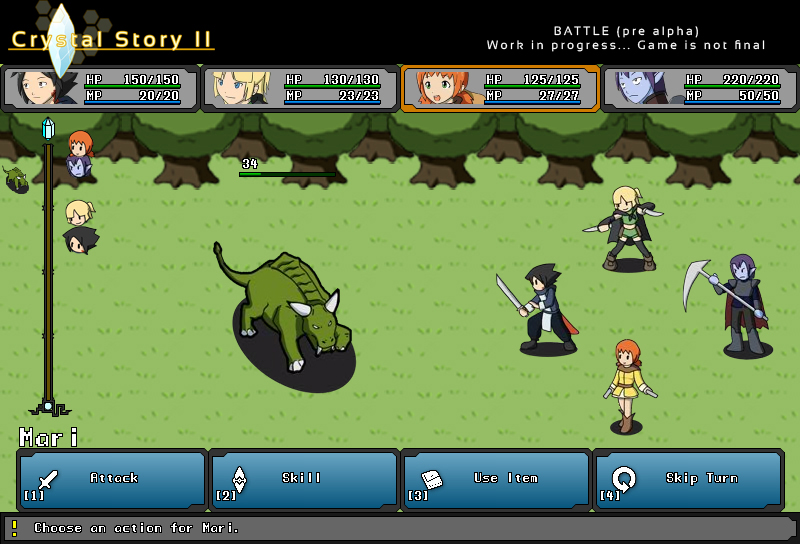 I updated the Crystal Story II page with information about the battle system. Check it out.

Feedback is always nice. I have received some recently and I decided to post them here along with my feedback. In a couple of weeks, I will have a lot of stuff to show. I will then start blogging on newgrounds and try and get more feedback there.

I have redesigned the battle system to have an atb bar. Both players and enemies start randomly at the bottom half of the bar. If a character reaches the top of the bar, it signifies it’s their turn. The 2 modifiers that can influence the turn are Speed and First. Speed stat makes the character move up the bar faster. First automatically gets you a preemptive strike (can be found on equips).

– Also, the thing about being able to upgrade all the equipment was great… but I think there should be a way to know the base stats of the equipment, to really compare it with other without having to upgrade something you will probably discard.

This is a good idea. I will do this.

– About the character types: It was quite great to be able to choose a class… however… in the end, the Mage class was quite overpowered, don’t you think? Maybe only one or two characters should have access to that class… Also, there were some skills that repeated over all the skill lists… maybe the characters should be more unique… And honestly, in my opinion, only the support/healer of the party should have most of the “stat up” spells… that way, it would make that class more interesting and people wouldn’t have a party full of attack-mages.

Currently, I have 6 classes. I’m planning to have each char 3-4 unlocked classes during the main story line and the rest unlocked on the optional bosses. It won’t be unlocked at the start though. As you progress through the story you get to unlock a class after a certain point. So the build diversity comes as you play. I don’t know if that will balance it out. I guess i will have to test it.
(oh and also i’m planning to have unique skills based on their weapon tier. I haven’t worked on it yet though)

– The party: I think each member should have much more different stats. While I was playing, it always seemed like each character could be the best at everything with the right equipment… I dont know… maybe giving characters at least one “prefered” stat will make each of them useful at each situation.

I redesigned the talent trees to include stat boosts as well. So when you have for example the thief class unlocked, the stats mostly on that tree are going to be speed. You wont deal as much damage, but your turns would be much faster and you can easily react on certain situations like healing right after an attack. You can also combine that with a mage tree and be a glass canon. Little health, but fast casting.

– About the enemies… the only thing I would change, is that I would put the items they could drop at their description, and also their elemental affinity, to know which of the 4 elements would do more damage… And well… it wouldn’t hurt if at least the strongest ones had some animations… right? =)

I will rework the bestiary to add those. I’m still thinking about the animations. Maybe for now, especially on the main quest bosses. (I hope i will). It just depends if i have time.

– And finally, about randomness… I don’t think certain things should be decided randomly… mostly, the items at the shop… it is quite easy just to go out and enter again until you get the items you want… Also, the treasure chest locations shouldn’t be random either… but well, I see that since in the new game it will be an open world, it probably wont be that way…

Nope it wont be anymore! :)
I’m having fun putting in treasures for each of the locations. Also shops are selling predetermined stuff now based on your progress. 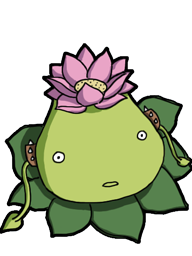 I found a checklist plugin that I can use to keep track of my progress. I’m going to try it for a bit and see if it helps.

Edit: Nope it doesn’t. Going to try a different approach.